The rebellion in adolescence is caused by numerous physical and endocrine changes experienced by teenagers, some of which negatively affect their self – esteem and well – being psychological.

These biological changes will lead to many behavioral changes, such as apathy, sadness or rebellion.

The first thing to do is to accept is that your child has entered a new stage of life and inevitably will change in many ways.

At this time, neurobiological factors will be particularly important, although they will not be the only ones.

Rebellion, due to the family conflicts involved, is one of the behaviors that are perceived more easily, and the one that receives the most attention.

Although you may find it difficult to deal with a teenager who shows challenging behavior, you should know that this attitude also means future benefits.

The fact that a teenager rebels against “authority” -that is, parents and teachers-will help him become an adult who defends his ideas and rights.

On the other hand, we find that submissive adolescents will not develop these skills and will become equally submissive adults.

Therefore, we propose that you begin to conceive this defiant attitude as an “adaptive rebellion”.

Here are some causes that lead adolescents to behave in an aggressive or rebellious way:

Causes of rebellion in adolescence

As we have said before, there are many biological changes that a teenager is going through, causing him to be irascible, sad or aggressive.

For example, it is common among teenagers who dislike body changes such as widening of the hips or development of hair in the legs and underarms.

The boys are usually more affected by the change in height they are going through, which makes them perceive themselves as clumsy in sports in which they stood before.

The following @nalogy will help you to better understand this situation:  Imagine that every morning you had to drive a car that is growing gradually.

When you adapt to the new size change, there would be a new “lug”, so you will never feel safe at the wheel.

To these biological changes, it adds a period of psychological instability that will hinder their family, social and school interaction.

Among the biggest challenges, there is an identity crisis that they have to face, after which they will have a greater knowledge of themselves and a more stable personality.

At this stage in which children begin to enter the stage of adolescence, they leave their parents aside as major attachment figures, and begin to strengthen relationships with their friends and classmates.

This is because they are trying to bring about parental distancing. Creating one’s own identity is one of the challenges of this stage.

For this reason, you may perceive that your child is very vulnerable and influential to the opinion of his friends, spending more time with them than with his own family.

You may also dislike the way you start dressing or combing. Sometimes they even show interest in tattoos and piercings.

As we will see later, this aspect is very important to lay the foundation of your individual identity.

In this age when social relations are particularly relevant, a teenager will experience great sadness and dejection in the face of unsatisfactory social relations – both with friends and with sentimental couples.

All the changes that occur in this stage will be lived with a much greater intensity.

For example, a change of residence, a break in a relationship, a conflict with a friend, etc. can cause a mixture of fuzzy feelings that the teenager does not know how to handle.

In addition, failure to have good relationships in school – if he is a victim of bullying, for example – can lead to maladjustment in many areas of his life.

This situation is aggravated when young people do not want to share their problems with their parents or friends, out of fear or embarrassment. 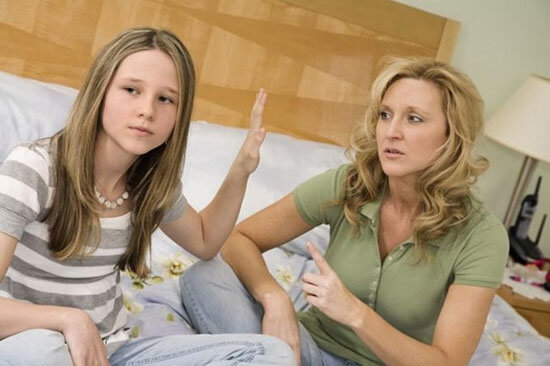 In today’s society there have been changes in the traditional family model, in which the father was the one in charge of work and the woman was concerned with the education of her children.

Fortunately, we have left behind that obsolete family model, and women have also entered the labor market.

However, with this new family structure, children may feel that their parents are absent.

To avoid this, and to promote healthy parenting relationships, it is recommended that both parents be more involved in the education of children.

On the other hand, sometimes it happens that the teenager perceives injustices that occur in the family.

For example, you probably know of a case of jealousy between siblings, where one of them often complains about the other’s benefits.

At this point we must be especially careful, since the perception of inequality of an adolescent is a clear trigger of violence and aggressiveness.

Take an equal attitude with your children, so that the brothers have the same rights and obligations.

5- Violence in the media

Adolescent rebellious behavior is associated, in many cases, with aggressive manifestations.

Numerous studies have attempted to find a relationship between perceived violence in the media and violence manifested by children and youth.

Although this is not a very clear relationship, indicators have indeed been found that exposure to violence encourages adolescents to behave in this way.

One of the most interesting models that try to give explanation to this phenomenon is the one of Bandera:

According to this author, people who behave aggressively have difficulty being empathic and lack sensitivity to the feelings of others

Bandera states that exposing violent models in their environment or in the media is a necessary but not sufficient condition for the adolescent to behave in that way.

In other words, that adolescents have access to violent models will encourage aggressive behavior, but other factors are needed.

According to Bandera, the child and adolescent population will present an aggressive behavior when it perceives that this brings him some kind of benefit.

For example, boys who get approval from others behaving aggressively will tend to perpetuate this behavior.

In addition, it is important for the adolescent that the aggressive model is relevant to him, such as a companion he admires or a hero of fiction.

On the other hand, the author also talks about the cognitive mechanisms that young people use when using violence (such as dehumanization of victims, self-deception with respect to consequences, etc.).

6 Tips for treating rebellion in adolescence

So far we have exposed the main causes that lead to challenging and rebellious behavior in adolescents.

Here are some tips that can help you deal with your children and make this stage easier:

Keep in mind that this is a passing phase. Accept changes that are occurring in this period.

Surely your son has complained more than once that no one understands him, or openly states that he is misunderstood.

You may find it difficult to accept, but you may be right. Try not to focus on the punishments you impose on your child and try to understand their point of view.

If you show yourself open, if you talk about your fears and concerns when you were your age, you will see you in a closer way, as someone you can trust.

Tell her about your friends, about your first sentimental relationships, and do not try to look into her own – that would only distract you further.

Also tell him about your relationship with your parents, so that you feel identified in your experience.

Encourages family communication during meals, without turning on the television or other electronic devices.

Enjoy those family moments and stay calm if there are altercations on the table.

2- Do not prohibit everything you ask

We have already seen some of the demands that your children can impose – punching, tattoos, and changes of look, among others.

Select some areas in which you can be more permissive, so you do not become your enemy.

For example, you could allow him to choose the clothes he likes or decorate the room at his whim.

In fact, you can get even more involved if you go shopping and accept the style of clothing or music you like.

If you learn to negotiate with your child, you will see how their behavior shows a positive change.

It leaves aside the education consisting of a dictatorship, in which parents impose the rules and there is no possibility to discuss them. Everything can be discussed.

It is also important that your partner and you agree-creating enmities between you will only cause the child to take advantage of the situation in their own benefit.

Use this negotiation technique for topics such as time of arrival home, travel, etc. Remember that you can always reach midpoints.

4- Encourage you to play a sport

Adolescents are often full of energy and sometimes this is why they behave aggressively. Therefore, a good option is that you propose to do some sport.

At this point it is recommended to be especially cautious, since some competitive sports – such as football or basketball – can boost aggressive behavior. Consider other options such as athletics, paddle, jogging, among others.

It is proven that shouting does not solve conflicts. Instead, you will only be more angry and aggressive. Explain to your child that while using a high tone of voice, you will not be able to talk to you.

On most occasions, teens scream to get attention and try to wrest authority from you.

Never enter that game, you are an adult and you must be above these provocations.

We recommend that you ignore this behavior until your child has calmed down and talked to you as an adult.

Little by little, you will establish this behavior of dialogue with you, since you will see that you will not get anything by shouting.

6- If the problem persists, consult a specialist

Finally, you should know the dangers of perceiving these challenging behaviors as normal behavior when it comes to something more serious.

Numerous adolescents have masked depressions – some for serious causes such as bullying or harassment.

They are called in this way because young people, far from presenting the typical symptoms of apathy and sadness, manifest aggressive behaviors.

If this is the situation of any of your children, you should consider the possibility that they are going through a period of psychological maladjustment.

Implicate in your life, not overwhelmed, to inquire a little more about the real reason for his aggressive or defiant behavior.

He shows concern about the notes and visits the teachers frequently, to know what behavior shows in the school and if their social relations are adequate.

The symptoms of mental problems may go undetected, confusing with the typical crisis of adolescence.

Another reason to be concerned about your child is that mental illness such as depression may be accompanied by substance use or suicide attempts.

Therefore, in case you perceive anomalous behavior, it is advisable to go to a specialist – psychologist or pediatrician – to indicate if it is necessary or not to start a psychological therapy.

We hope these tips have been useful to you. Remember that no one teaches us to be parents, so we do the best we know.

Do not blame yourself for the behavior of your teenagers, and enjoy them at every stage.