In addition, it is associated with involvement of the external auditory c@nal and tympanic membrane (Gómez-Torres et al., 2011).

Ramsay-Hunt syndrome is a medical condition of an infectious nature and is also the second cause of peripheral facial paralysis without traumatic origin (Boemo et al., 2010).

The clinical presentation of this pathology is very varied, being frequent to find it classified in four stages (Arana-Alonso, et al., 2011).

However, some of the symptoms and medical complications that occur as a result of the condition of Ramsay-Hunt syndrome  may include: facial paralysis, headache, nausea, elevation of body temperature, hearing loss, tinnitus, vertigo, among others (Boemo et al. al., 2010).

On the other hand, in the case of the diagnosis of this pathology, the clinical history and physical examination  are essential (de Peña Ortiz et al., 2007). In addition, it is also possible to perform various complementary tests to  specify the clinical findings (Boemo et al., 2010). 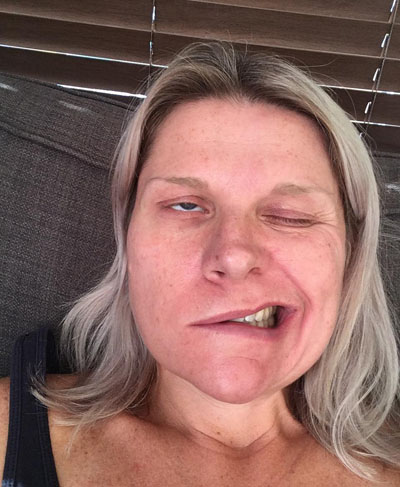 The treatment of Ramsay-Hunt syndrome usually includes the administration of corticosterolds and antivirals. The essential objective of medical interventions is to avoid secondary medical sequelae (Boemo et al.,  2010).

It is a rare neurological disorder characterized by facial paralysis, involvement of the external auditory c@nal and the tympanic membrane.

To designate this pathology, different names have been used in the medical literature. Currently, Ramsay-Hunt syndrome (SRH) is the term used to refer to the set of symptoms that occur as a sequence of facial nerve involvement due to a herpes zoster infection (Facial Palsy UK, 2016).

This medical condition was first described by the physician James Ramsay Hunt, in 1907. In one of his clinical reports they presented  a case characterized by facial paralysis and herpetic lesions in the auditory c@nal (de Peña Ortiz et al., 2007).

This pathology can also be called otic herpes zoster and is considered a polyneuropathy caused by a neurotrope virus (Plaza Mayor et al., 2016).

The term polyneuropathy is used to refer to the presence of a lesion on one or several nerves, regardless of the type  of lesion and the anatomical area affected (Colmer Oferil, 2008).

On the other hand, neurotropes are pathological agents that essentially attack the nervous system (SN).

The facial nerve or the cranial nerve VII, is a nervous structure that has the function of controlling a large part of the functions of the facial area (Devéze et al., 2013).

In addition, the facial nerve is a pair structure that runs through a bone c@nal, in the skull, below the ear area, to the facial muscles  (National Institute of Neurological Disorders and Stroke, 2010).

When any pathological event (trauma, degeneration, infection, etc.) leads to the development of lesions or inflammation in the facial nerve, the muscles responsible for controlling facial expression can be paralyzed or weakened (American Academy of Ophthalmology, 2016).

When the herpes zoster virus reaches the facial nerve and adjacent regions, a wide variety of skin, muscle, sensory signs and symptoms may appear …

The most important clinical features of Ramsay-Hunt syndrome are:

Ramsay-Hunt syndrome is the second cause of atraumatic peripheral facial paralysis (PFT).

Regarding sex, there are no significant differences, therefore, it affects men and women equally (Boemo et al.,  2010).

Although anyone who has had chickenpox can develop this condition, it is more common among adults (Mayo Clinic,  2014).

Specifically, it can be observed more frequently in the second and third decade of life (Boemo et al., 2010).

Ramsay-Hunt syndrome is an infrequent or rare disease in children (Mayo Clinic, 2014).

The clinical manifestations of Ramsay-Hunt syndrome are varied, the symptoms can be grouped into several categories (Boemo et al., 2010):

Apart from this grouping, the characteristic symptoms of Ramsay-Hunt syndrome usually vary from case to case.

In most cases, there may be a prodromal phase characterized by the presence of (de Peña Ortiz et al., 2007):

On the other hand, various skin lesions also appear in the external auditory pavilion and in the posterior areas of the tympanic membrane (de Peña Ortiz et al., 2007):

In addition, of the signs and symptoms detailed above, facial paralysis is one of the most serious and notable.

In the patient affected by Ramsay-Hunt syndrome, it is possible to observe a decrease or absence of facial mobility, half of the face  is paralyzed or “fallen” (American Academy of Ophthalmology, 2016).

The vestibulocochlear nerve plays an essential role in the control of additive function and balance. Thus, when some of its two branches (cochlear or vestibular) are affected, various sensory symptoms may appear (Boemo et al., 2010).

Specifically, the symptoms resulting from the involvement of the vestibulocochlear nerve are specified in:

Because the clinical presentation of Ramsay-Hunt syndrome is very varied, it is usually classified in 4 stages (clinical classification of ramsay-hunt) (Erana-Alonso et al., 2011):

Ramsay-Hunt syndrome is produced by the Varicella-Zoster virus (VVZ) (Boemo et al., 2010). This virus is the cause of chickenpox and herpes zoster.

Various experimental studies indicate that, once chickenpox has contracted, the virus can remain dormant for decades. However, due to some conditions (stress, fever, tissue damage, radiotherapy, immunosuppression), it can be reactivated and, in some cases, lead to the development of a syndrome (Ramsay-hunt (National Organization for Rare Disorders, 2011).

The patient’s medical history should include the family and personal medical history, the registration of the symptomatology, the time  of presentation and evolution of the pathology, in addition to other aspects.

The clinical examination should be based on a thorough examination of the symptoms present. In addition, it is also essential to perform  a neurological examination to determine the presence of nerve damage (Peña Ortiz et al., 2007).

As for the complementary tests that are usually used, the cytodiagnosis or the serological study of the virus are essential to  determine the presence of an infection product of the varicella-zoster virus (de Peña Ortiz et al., 2007).

In the case of imaging tests, magnetic resonance imaging or computed tomography are useful to  confirm the presence of neurological damage.

The treatment used in Ramsay-Hunt syndrome focuses on curbing the infectious process, reducing symptoms and pain and, in addition, reducing the risk of the development of long- term neurological and physical sequelae  .

On the other hand, other non-pharmacological therapeutic interventions can also be used, such as surgical decompression (de Peña Ortiz et al., 2007).

This type of surgical approach is still very controversial, it is usually restricted to cases that do not respond to pharmacological treatment in at least a time longer than 6 weeks (de Peña Ortiz et al., 2007).

Generally, the treatment of choice for most cases of Ramsay-Hunt syndrome are antiviral drugs and corticosterolds (Boemo et al., 2010).

The clinical course of Ramsay-Hunt syndrome is usually worse than expected in other facial paralyzes. Approximately, a set of cases that range from 24-90% of the total, usually show significant medical sequelae (Boemo et al., 2010).

Although, with good medical intervention, both facial paralysis and hearing loss are temporary, in some cases it can be permanent (Mayo Clinic, 2014).

In addition, muscle weakness caused by facial paralysis prevents efficient closure of the eyelid and, therefore, external agents can cause eye injuries. It is possible that ocular pain or blurred vision appears as one of the medical sequels (Mayo Clinic, 2014).

Also Read: The Physiology of Sleep and its Stages

In addition, severe cranial nerve involvement can also cause persistent pain, long after the resolution of other signs and  symptoms (Mayo Clinic, 2014).