There are two types of anorexia with different symptoms: restrictive type anorexia and purging type anorexia. “Anorexia” means, literally, lack of appetite, and it is a symptom that can occur along with other diseases, such as a cold.

However, when the person, far from presenting a lack of appetite, controls the intake to be thinner, is when we speak of anorexia  nervosa.

Many people think that the difference between anorexia nervosa and bulimia nervosa is that in the first case, people simply restrict their  eating, while the latter have constant bingeing and vomiting.

This is a misconception of the types of eating disorders, since there are two clearly differentiated types of anorexia  nervosa.

As you will see later, a person with anorexia nervosa can also present vomiting, binge eating and other behaviors more related to the prototype  of bulimia nervosa. 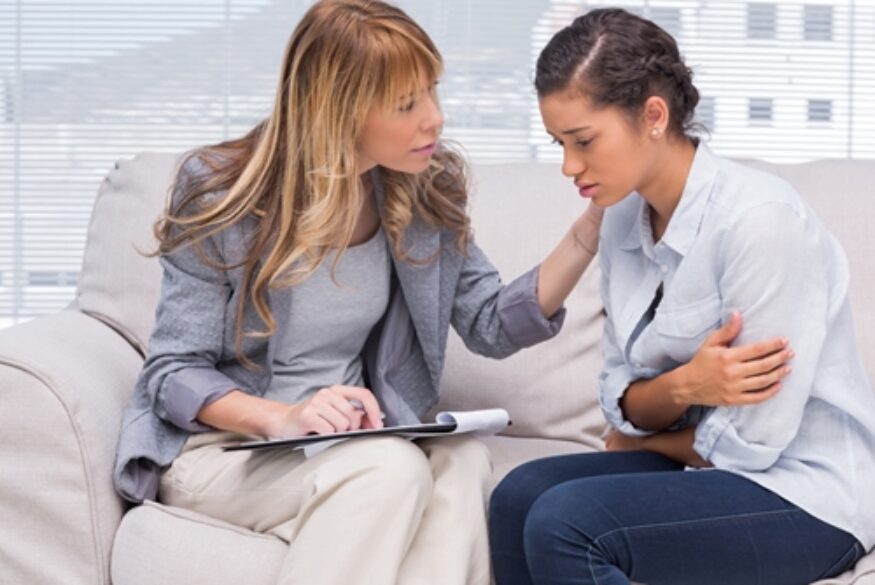 The most representative eating disorders -norexia nervosa and bulimia nervosa- have in common the extreme concern for image and body weight  .

The people who suffer from these disorders -mostly, girls- try to control their eating behavior in order to be thinner.

However, important differences also occur between both mental illnesses:

The main difference is the body weight presented by the person in question. If you are underweight (a weight less than recommended according to your  height and weight) and meets the criteria of amenorrhea, phobia to gain weight and alteration of body image, it is a person who has anorexia nervosa.

If, on the other hand, it is a person who is in normal weight or has some type of overweight, they will be classified as other eating disorders  -bulimia nervosa, binge eating disorder, eating disorder not specified, etc. -.

In the case of bulimia nervosa, some studies show that this disorder usually occurs more commonly among girls who have been  adopted.

On the other hand, with respect to people who present anorexia nervosa, it is found that girls with ADHD – Attention Deficit Hyperactivity Disorder – are more likely to develop this disease  as well as some types of Post Traumatic Stress Disorders, especially those  produced by having been victims of sexual abuse.

All maladaptive behaviors – such as binge eating, food restriction, vomiting, etc. – are carried out due to the presence of overwhelming feelings and  emotions, as well as to deal with situations that are very painful.

As you can see, these are diseases closely related to emotions, so it does not only have to do with the prototypes of  beauty present in today’s society.

It is the prototype that many people have in mind when talking about anorexia nervosa, in which girls lose their weight only through  physical exercise and excessive food restriction.

These people have enough self-control to not get carried away by their desire to eat excessively.

In this way, it is not common for this type of anorexia to have binge eating and subsequent compensatory behavior.

The characteristics that usually present are:

These are girls who stand out in many ways: they are beautiful, successful, with abundant social relationships, popular and who get everything they  propose.

They are very meticulous and use a lot of time and effort to do everything in the best possible way.

Who has this type of anorexia nervosa, as we have said, has extreme self-control, which allows them to deprive themselves of food even if they have a great  desire to ingest it.

This same self-control manifests itself in other areas of his life, such as studies or work.

Anorexic girls of a restrictive type usually present an impeccable academic record, which leads them to get a high job position and in  which they are given a lot of responsibility.

However, this occurs in those cases in which the disease has not evolved much or is in the early stages of the disorder, since  later, girls usually present an academic or work impairment, since the disease deteriorates practically all the areas of your  life.

Lack of spontaneity is another common feature of this subtype of anorexia nervosa.

As we have said before, girls have an excessive control over themselves, which they carry out at the expense of enjoyment and fun.

Thus, these types of people are more concerned with showing appropriate behavior to others than enjoying and having fun at parties or other social events  .

Despite all that we have previously said about perfectionism, hyperresponsibility, etc., these girls feel that they should try harder  to reach perfection.

When they make a mistake or mistake, they label it as excessively unpleasant and unbearable, negatively affecting their self-esteem.

They are never considered good enough, due to their high capacity for self-criticism.

These feelings of personal inefficiency also occur because they are often compared to the people around them, as if they were constantly competing  .

Anorexia nervosa of the purgative type

People with this subtype of anorexia nervosa also have a weight below the ideal in terms of their bodily characteristics.

However, unlike the subtype discussed above, people who present anorexia nervosa of the purgative type carry out binge eating that is  usually followed by compensatory behaviors -self-provoked vomiting, laxative intake, diuretics, etc.-.

This is the reason why it has also received the name of anorexia nervosa of the bulimic type.

Remember that the difference between this disease and bulimia is that people do not suffer a weight below the indicated.

For the rest, this subtype of bulimia has many similarities with bulimia nervosa (especially in relation to the personality characteristics of  people who suffer from it).

The specific characteristics of this purgative subtype are the following, mainly:

In the subtype of anorexia nervosa that we are describing, it is common for people who suffer from it to have family members who have had or are obese.

It is also often found that girls who present anorexia nervosa of the purgative type have been overweight in the past, which has  influenced the person to present a disorder of eating behavior at present.

This characteristic refers to the fact that people usually have a depressive, apathetic or discouraged state of mind.

It can also occur, in some people, in the form of irritability.

On numerous occasions, they state that they find it difficult to enjoy the small pleasures of everyday life.

This particularity refers to the fact that people who present this type of anorexia nervosa are usually very emotionally unstable.

They usually experience feelings of sadness and emptiness that alternate with feelings of euphoria.

The lability or sudden changes in the emotional aspect are reflected in the alimentary behaviors that they carry out, so they come to lose control  over themselves in a frequent way, just as they can not control their emotions.

Here we find, therefore, a fundamental difference with respect to the type of restrictive anorexia, in which they had a high self-control.

In the purgative subtype, there are frequently cases in which this addiction to food is accompanied by other addictions, such as alcohol, tobacco, other  substances, etc.

As you can see, the subtypes of anorexia nervosa share some characteristics -as causes, low weight, etc.-, although they also have many  differences.

What is anorexia nervosa?

The main characteristic of anorexia nervosa is the interest in continuing to lose weight, despite the fact that they are below their ideal weight.

Other criteria already mentioned, such as amenorrhea in women – absence of at least 3 cycles of menstruation – or delay of menarche in pubertal girls must also be met .

The intense fear to gain weight and a serious alteration of the corporal image are also characteristics that must be present to diagnose an  anorexia nervosa disorder.

It is, therefore, a serious mental illness that tends to cause havoc in the body, due to the starvation suffered by these people.

Among the physical symptoms that may occur among people with anorexia nervosa, the most striking are:

Why is the appearance of anorexia nervosa?

Next, we will explain some of the main causes that enhance the appearance of anorexia nervosa:

Belonging to a controlling family, perfectionist, in which the mother takes the reins of the daughter’s life, are triggers of this  disorder.

Likewise, this disorder of the alimentary behavior has always been related more to the relevance to a family of medium-high class, although in the  last years an increase in all the social classes can be observed.

According to the latest studies, it seems that anorexia nervosa may present more genetic factors than previously thought.

According to some studies, several genes could be involved – in addition to other types of factors – that would influence the appearance of this  disease, especially chromosome 1.

Some of the psychological triggers that most often influence the onset and progression of this disease are:

The current society attaches great importance to the physical, especially in the case of women, who are perceived as more successful people and with  greater positive qualities when they have a slender figure.

This social pressure is very present in the onset of food diseases, since girls are assimilating this idea and begin to attach  excessive importance to the physical.

Thus, it is found that girls have the most problems in relation to food, especially in ages between 10-30 years  -these ages vary according to the specific eating disorders-.

Course and prognosis of anorexia

Both the course of this disease and the prognosis of it are very variable, since it depends on multiple factors, as has already been seen.

An exhaustive follow-up of the patient and an age of early onset of the disorder are considered favorable elements for recovery.

On the other hand, some of the factors that worsen the forecast are:

In addition, we find that, unfortunately, between 5 and 25% of cases in which they present anorexia nervosa end in death – most due to  malnutrition or its consequences, although in other cases they are caused by suicidal behavior.

We hope you found this article interesting and that it has given you a lot of information about this complex disease and its subtypes  .

” Beauty has nothing to do with the size you wear. It has to do with what’s in your heart “.