The rupophobia is a psychological disorder that is characterized by an irrational, excessive and unjustified fear of dirt. It constitutes an anxiety disorder and is part of the diagnostic group of specific phobias.

People suffering from this psychopathology have high anxiety responses when exposed to dirt. The anxiety generated in these situations is explained by the fear they have towards the dirty elements.

Ruphophobia often affects the life of the person. Mainly because the fear of dirt forces him to be permanently cleaning the areas where he is.

Likewise, as many of the spaces in which people move do not guarantee a state of zero dirt, the manifestations of anxiety often appear.

In this way, rupophobia is a disorder that can be much more harmful than it seems at first glance. In fact, treating correctly who suffers from this disorder is essential for their well-being.

In this article we review the information that we have today about rupophobia. Its symptoms, its diagnostic criteria are explained, and the causes and treatments of the pathology are discussed.

The main axis of rupophobia lies in the fear of the elements that are in a dirty state. In this way, the anxiety alterations of this disorder are caused by the fear of dirt itself.

Dirt is not an element that generates anxiety responses to people. In fact, few individuals experience sensations of fear when exposed to dirty spaces.

However, in the same way that happens with any other element, there are people who have a greater tolerance to dirt and subjects who present a greater rejection towards it.

In this sense, the mere fact of experiencing fear, fear, discomfort or discomfort in dirty spaces does not imply the presence of rupophobia.

To be able to talk about this disorder it is necessary that the person experiences a phobic fear towards dirtiness.

The 7 elements that have to present the fear of dirt to be able to classify it as referring to rupophobia are:

Any kind of fear of dirt is often interpreted, at first glance, as unsound and incongruous. However, to detail that fear is irrational you should explore a little more about its qualities.

An individual may fear spaces with high amounts of dirt for fear of becoming infected or catching a disease. In cases where this possibility is real, the presence or absence of rupophobia should be studied very well.

In rupophobia, the fear experienced is totally irrational for others as well as for the individual who suffers it.

Thus, there is no congruent reason to explain why dirt is feared. The person with rupophobia is totally incapable of verbalizing why he fears such situations.

People who have a clear rejection of dirt can experience feelings of less or greater discomfort when exposed to it.

However, the discomfort or unpleasant sensations that are experienced are often noticeably controllable. That is, the individual has a certain degree of adaptation that allows him to modulate the feelings of nervousness that he experiences in those situations.

In rupophobia instead, the person experiences an intense fear of dirt that can not be rationalized or controlled.

The fear suffered escapes the voluntary control of the individual, so that he is unable to manage his state of anxiety when exposed to his feared stimulus.

The intensity of fear is another key aspect of rupophobia. This is experienced with excessive feelings of fear regarding the demands of the situation.

Normally, dirty spaces that a person with rupophobia fears pose no risk. However, the person interprets them as highly threatening.

This fact motivates very high anxiety responses and a significant impact of this on the state and functioning of the individual.

The high intensity of the fear experienced in rupophobia causes a clear behavior of avoidance and / or escape from the feared situation.

This fact translates into that the individual with this disorder will avoid by all his means approaching situations in which there is dirt. Likewise, when you are in contact with your feared stimulus, you will try to escape from that situation.

The avoidance behaviors carried out by the person with rupophobia are motivated by the high discomfort caused by dirtiness. In this way, the subject avoids this type of situations with the aim of avoiding the anxiety and anguish that it provokes. 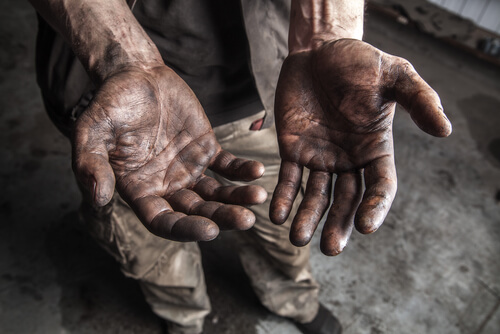 The fear of rupophobia is not transient or transient. Fear persists and is invariably experienced whenever the individual is in contact with dirt.

Likewise, both the fear and the anxiety response that this causes, are chronic if not intervened.

6- Fear not related to certain stages

At certain moments in life, people may have a greater predisposition to experience fears. Periods of high stress, personal dissatisfaction or low self-esteem can increase the likelihood of developing fears.

However, the fear of rupophobia is not subject to the stages or personal moments that an individual goes through. From the moment the fear of dirt develops, it is experienced permanently.

Finally, the fear of dirt that causes rupophobia plays an important role of maladaptation.

The fact of experiencing such high feelings of anxiety when exposed to dirt seriously affects the person’s life, alters their psychological functioning, and affects their behavior and functionality.

The experiences of fear automatically cause an increase in tension and anxiety in the person.

When fear is not phobic and adaptive, the anxiety alterations experienced are transient.

However, when the fear meets the requirements discussed above, the anxious symptomatology increases, both in intensity and severity.

In this way, the typical symptoms of rupophobia are alterations of anxiety caused by the fear of dirt.

The fear experienced in the disorder is serious, which is why anxious symptomatology is also. Specifically, it affects the three psychological levels of the person: physical, cognitive and behavioral.

The physical symptomatology are the most well-studied manifestations of anxiety. These occur in any anxiety disorder and cause major alterations.

In fact, physical symptoms are the main axis of distress caused by anxiety, and generate the most intense manifestations of anxious disorders.

In the case of Ruphophobia, the physical signs can vary markedly in each case. There is no single anxious response and the symptoms may be slightly variable.

However, in most cases, one of the following physical manifestations is experienced:

The cognitive symptoms of rupophobia encompass all those thoughts about the person’s fears of dirtiness.

These thoughts play a fundamental role in the development and maintenance of the disorder. Likewise, they can increase the physical symptomatology and, therefore, the feelings of discomfort.

The thoughts that a person with rupophobia can develop can be multiple and very diverse. Generally, the cognitions about the negative properties of the dirt and the few personal capacities are supported to face them as the main ones of the disorder.

Finally, as already mentioned, the fear of dirt, and the resulting physical and cognitive symptoms, cause a serious affectation on the person.

This affectation is widely reflected in the behavior, which is modulated by the fear of dirt.

Like any other psychopathology, the diagnosis of rupophobia must be made by a mental health professional.

The tools for its evaluation can be diverse, although the most common is the use of interviews and psychometric tests.

These techniques are used to examine the type of fear experienced, the repercussions it causes and the symptomatology that manifests itself.

In order to establish the diagnosis of rupophobia, the following criteria must be met:

Ruphophobia is a type of specific phobia that is not very prevalent in society, which is why it provides little research on its etiology.

However, the study of specific phobias shows that all of them share important characteristics and, probably, have similar causes.

In this sense, nowadays it is concluded that there is no single cause for specific phobias, but different factors that feed back into their development. The main causes of rupophobia seem to be:

Having been exposed to situations with dirt that have been experienced or interpreted as traumatic, can motivate the development of rupophobia.

Having received information (especially during childhood) about the negative components of dirt can also play an important role in the development of the disorder.

Certain elements about the personality and thoughts of the individual may favor the development and maintenance of rupophobia. The main ones are: unrealistic beliefs about the damage that can be received, attentional bias towards threats and low perceptions of self-efficacy.

The main treatment of all specific phobias is psychotherapy. Specifically, the cognitive-behavioral treatment constitutes the intervention with higher rates of efficacy of the disorder.

In this treatment, a psychotherapist will try to expose the individual to their feared stimuli. The exhibition is carried out in a gradual way and allows the habituation of the person to the dirt and, therefore, the overcoming of the fear towards it.

Other techniques that usually accompany the treatment are relaxation (to reduce the symptoms of anxiety) and cognitive techniques (to correct dysfunctional thoughts about dirt).