The dementia is a mental illness suffered by people over 65 years and is characterized by loss of cognitive functions.

It is considered a disorder that starts gradually, evolves progressively and is chronic in nature.

However, by detecting and properly intervening the disease, it can attenuate or slow down its evolution and, in this way, provide more healthy years of  life to the elderly person who suffers it.

This article will be devoted to talking about the different types of senile dementia, explaining their characteristics and mentioning what therapeutic treatments  can be performed. 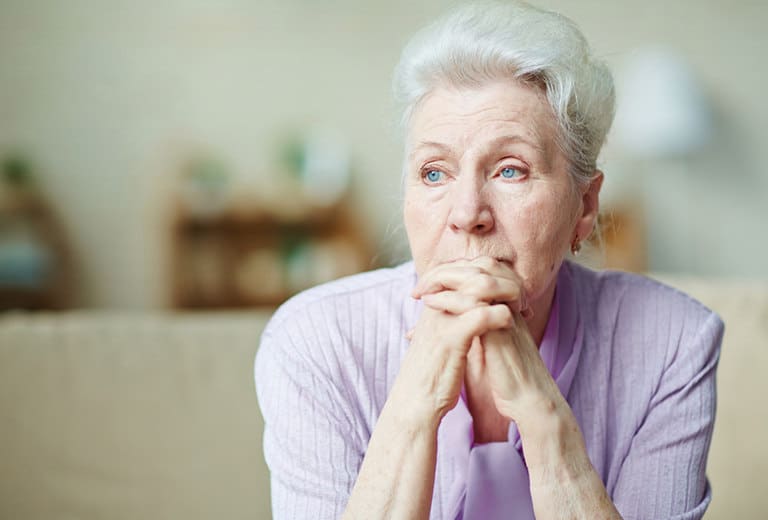 Senile dementia is a syndrome characterized by the deterioration of cognitive functions, with a gradual and progressive onset, and which is capable of affecting  the activities of the patient’s daily life.

The “senile” specification in the term of dementia was used to differentiate between those patients older than 65 years who suffer from a dementing syndrome and  those who present it more precociously.

Likewise, it should be noted that the term dementia does not refer to a single disease but to a syndrome that may be caused by many chronic  diseases, such as Alzheimer’s disease, Parkinson’s disease, vitamin deficits, etc.

However, those alterations in which only memory loss is present, no other cognitive deficits and the patient’s daily activities are not affected should not be classified as dementias  .

Thus, dementia should be differentiated from cognitive deterioration associated with age (DECAE), which is a relatively benign phenomenon and is linked  to normal aging of the brain.

In this way, if in a person of about 80 years we observe that he has less memory than when he was young or that he is a little less agile mentally, this does not  mean that he has to suffer from dementia, he may have a simple normal aging of his functions.

In the same way, senile dementia must be differentiated from mild cognitive impairment (MCI).

MCI would be an intermediate step between DEMAE and dementia, since cognitive deterioration is higher than what would be considered normal in  aging, but less than what occurs in dementia.

So, in order to talk about dementia, at least two conditions must be presented:

In senile dementia, a large number of cognitive deficits may appear.

In each case, depending on the type of dementia that is suffered and the part of the brain that is affected, some functions will be more preserved and others  will be more deteriorated.

However, the evolution of senile dementia is progressive, so that as time passes, dementia will spread throughout the brain as if it  were an oil stain, so all functions will be affected sooner or later .

The cognitive functions that can be altered are:

It is usually the most common symptom in most dementia syndrome. You may start with difficulties to learn new information and forget about recent things  .

As the disease progresses, memories of past events are also affected, until you forget important events and the  closest relatives.

It usually appears in the early stages of many types of dementia, and like the rest of the functions, as time goes by, practically all orientation abilities are lost  .

It usually begins with problems to remember the day or month in which it is. Later on you can lose your ability to orient yourself on the street,  not remember the year in which you live or forget your own identity.

There are some types of dementia where attention deficits are very noticeable.

In them the person has many difficulties to concentrate or even attend to something for just a few seconds.

Patients with dementia may have problems when speaking, such as anomie when they do not remember the name of certain words or reduction of  verbal fluency when they speak more slowly.

Dementia also alters the ability to recognize external stimuli through any stimulating pathway: visual, tactile, auditory, olfactory … In  advanced stages, this difficulty can lead the patient to not recognize the face of his family or even his when he sees reflected in a mirror.

The ability to coordinate movements is altered. A person with dementia may not be able to move their hands properly to pick up scissors and  cut out a sheet of paper.

In dementia, the ability to plan and organize activities is also lost. For example, to boil rice you have to take a pot, pour  water, boil it and pour the rice. A person with Dementia may not be able to perform this mental exercise.

Finally, one of the capacities that is usually lost in the middle stages of all types of dementia is the ability to construct logical thoughts  autonomously for any event or activity.

Normally cognitive deficits do not appear in isolation, and are accompanied by a series of psychological symptoms that cause a lot of discomfort both in  the patient and in their caregivers.

As a specific psychological symptomatology we can find:

1. Delirious ideas:  presence in between 10 and 73% of cases of Dementia. The most common idea is “someone steals things,” which may be due to the
inability to remember precisely where they keep objects.

2. Hallucinations:  the frequency of this perceptual alteration is between 12 and 49% in patients with dementia. The visual hallucinations are the most common,  especially in dementia with Lewy bodies.

3. Identification errors: it  is another perception disorder. In this case, the person with dementia can believe that at home live people who are not really ( phantom host syndrome  ) or not recognize their own reflection in a mirror and believe that it is another person.

4. Depressive mood: depressive  symptoms affect a non-negligible minority of patients with dementia at one time or another of the disease (20-50%).

5. Apathy:  the lack of motivation develops in practically half of the patients with dementia. These symptoms are often confused with depression.

6. Anxiety:  a common manifestation of anxiety in dementia is the “Godot syndrome”. This is characterized by repeated questions about a future event  due to the inability to remember that you have already asked and have already responded. The patient believes that he never gets an answer and increases his  anxiety.

Likewise, in some cases of dementia, behavioral symptoms are also present, such as: physical aggression, wandering, restlessness, agitation,  screaming, crying or bad language.

What types of dementia are there?

Dementia is like an oil stain, begins affecting a part of the brain, causing certain symptoms, and then spreads  throughout all brain areas, causing a greater number of deficits and eliminating all the capabilities of the person.

However, there are different types of dementia. Each type starts affecting a different brain area and causes particular deficits. In addition,  each of them seems to have different mechanisms of appearance and evolution.

The DSTA is characterized by starting with a deterioration of memory, decreasing the ability to learn, and presenting frequent forgetfulness and orientation problems  .

Subsequently, other cortical symptoms appear, such as agnosia, aphasia, apraxia, and deterioration of executive functions.

The onset of this dementia is very gradual and the evolution is slow and progressive.

2. Dementia due to Lewy bodies (DCL)

It is a type of dementia very similar to Alzheimer’s, cognitive deficits are practically traced to those of the DSTA and has a very similar beginning and evolution  .

It differs basically by 3 aspects: presenting a greater alteration of the attention and fluctuations in the cognitive deficits, suffering parkinsonian symptoms  of tremor and slowness of movements, and suffering frequent hallucinations.

It is a particular dementia that predominantly affects the frontal lobe, a fact that causes its first symptoms to be extravagant behavior changes,  amnesia and early apraxia, and serious alterations in speech and movement.

The main characteristic of Parkinson’s is the progressive death of dopaminergic neurons, which causes dysfunction in movement, causing tremor, bradykinesia  and rigidity.

Likewise, it can cause cognitive deficits such as lenification of thought and movement, dysfunction of the execution capacity and deterioration  of evocation memory (inability to retrieve stored information).

DV is a complex disorder in which the symptoms of dementia are the result of vascular problems that affect the blood supply to the  brain.

Its symptoms can be of any type, depending on the area of ​​the brain that has damaged vascular diseases.

It is affected by around 30% of people affected by HIV. There are serious deficits in attention and concentration, difficulties in acquiring and remembering  information, and alterations in the denomination and verbal fluency.

Apart from these commented, there are other less frequent dementias such as: corticobasal degeneration, Huntington’s disease , progressive supranuclear palsy  , normotensive hydrocephalus, dementias of endocrinometabolic origin, etc.

How many people have dementia?

The global prevalence of Dementia varies between 5% and 14.9% in the entire Spanish population

After 65 years, the prevalence increases to practically 20% and at 85 years it reaches 40%, so that cases of dementia increase with  age.

Of all the types the most prevalent is Alzheimer followed by vascular dementia and dementia by Lewy bodies.

How can they be treated?

Nowadays, the treatment of senile dementias does not allow to eradicate the disease but to re-intensify the cognitive deterioration and to provide the maximum  possible quality of life to the patients.

No drug capable of curing a dementia syndrome, however, drugs such as inhibitors accelicolinesterasa tarcina, the galanthamine or  the rivastigmine may have a neuroprotective effect and contribute to the slowing of disease progression.

Likewise, psychological symptoms such as hallucinations, depression or anxiety can be treated with different psychotropic drugs such as antipsychotics,  antidepressants and anxiolytics.

Therapies have been proposed in 4 different areas:

1. Cognitive area : in order to maintain the patient’s capacities and slow down the evolution of deficits, it is very important to carry out cognitive stimulation activities in  which memory, attention, language, executive functions, etc. are worked on.

2. Psychosocial area: it  is important that the patient retains hobbies, perform activities such as animal-assisted therapy or music therapy to increase their well-being.

4. Motor:  people with dementia usually suffer a deterioration of their physical abilities. Keeping fit with activities of passive gymnastics, physiotherapy or  psych0m0tricity is essential.

Also Read: The 2 Types of Bulimia and Their Characteristics

Thus, senile dementia is a disorder that gradually quenches the brain of the person who suffers, however, you can work to  provide the greatest possible health during the course of the disease. 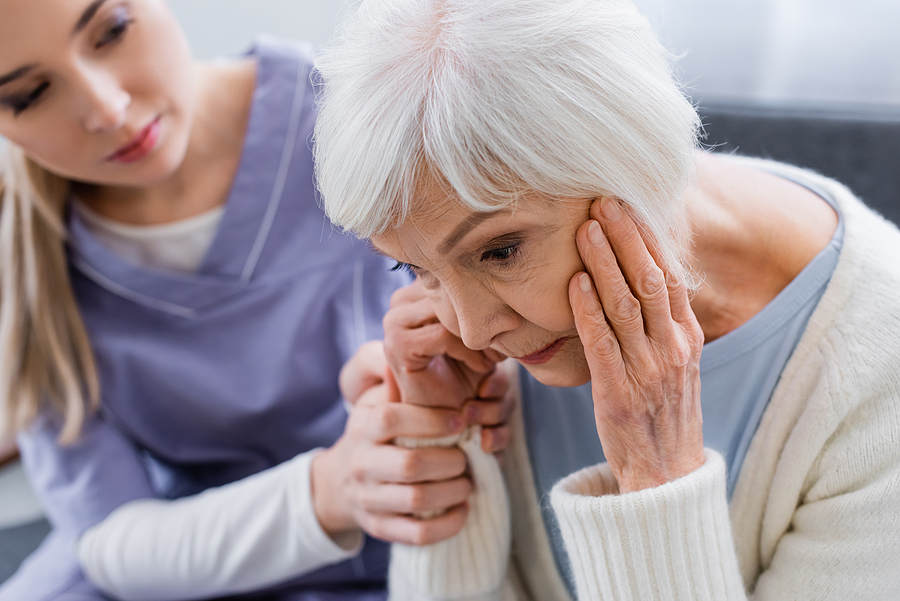