There are  two main types of bulimia : purgative and non-purging. Many people consider that bulimia nervosa is a disorder of eating behavior in which people binge and then carry out compensatory behaviors, such as vomiting or using laxatives.

Although this brief description contains some truthful information, with this article I intend to provide you with a more real and complete vision of this  mental illness: characteristics, causes and types -purgative versus non-purgative-. 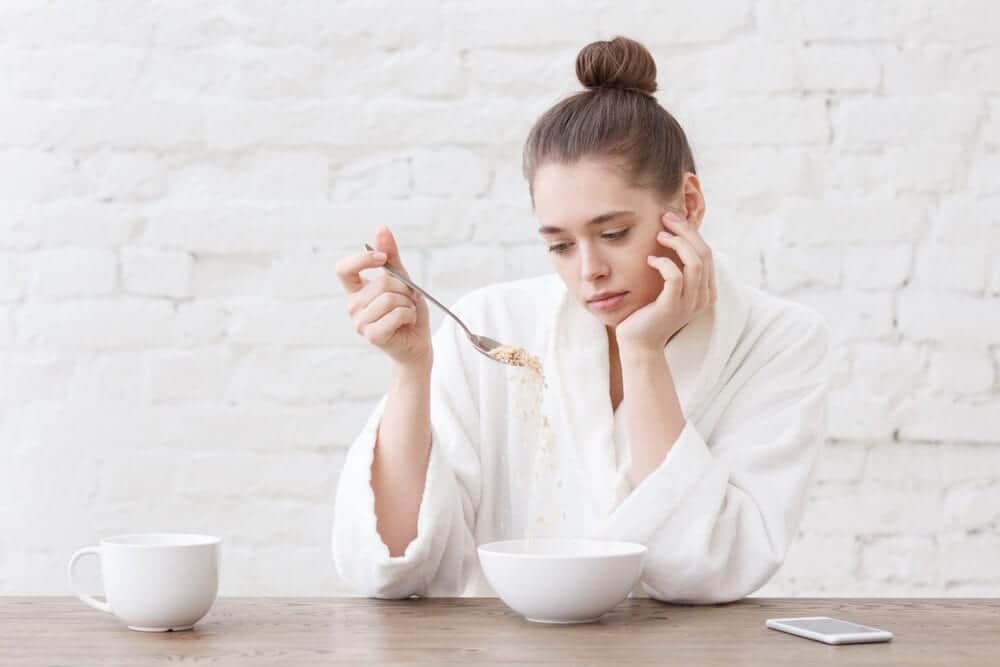 This subtype is much less common, since it only occurs in 6-8% of cases. Therefore, it is not surprising that it is also the least known.

These are people who do not resort to vomiting or other compensatory methods of this type after binge eating-they do not use laxatives, edemas, etc.-.

In this type of bulimia nervosa, the main method used to lose weight is the performance of intense physical exercise, as well as resorting to fasting and  dieting.

These long periods of starvation are the cause of binge eating again, as the person experiences a voracious hunger that is not able  to dominate.

Again, after this binge episode, the girl will feel remorse and guilt, depriving herself of food again or doing physical exercise in an excessive way  .

These methods of weight control are very ineffective in eliminating the amount of calories consumed in a single binge from the body.

The consequences that this subtype of bulimia nervosa produces in the organism are much less accentuated than the purgative subtype, as we will see  later.

The great majority of people who present bulimia nervosa are classified in the purgative type, which is characterized by the presence of vomiting and use of  laxatives or enemas after binge eating.

The goal of these people is to eliminate as soon as possible the highest possible proportion of food ingested, to end the anxiety that causes them to  think that they will gain weight. They also present irrational thoughts about the functioning of the organism.

For example, some girls first eat a food of a characteristic color, such as a red tomato, and they insist on continuing to vomit until  the vomit is the same color (since it was the first food eaten and means that there is no longer nothing in the stomach).

This and other completely erroneous information are transmitted daily through social networks and pages about anorexia and bulimia.

Although these pages are persecuted and continuously censored, they reappear with another name and with the same intention: to transmit  information that they consider truthful, to make competitions to see who loses more weight in a short period of time, to support one another , etc.

In fact, in bulimia nervosa -in both types- the girls are in normal weight or have some type of overweight.

This subtype is the one that produces the greatest negative effects, both in relation to the ravages suffered by the organism and the behaviors and thoughts that  show:

In 50% of cases, amenorrhea occurs in women (loss of menstruation as a consequence of the disorder).

In addition, we found that the personality characteristics of girls suffering from bulimia nervosa are similar, regardless of the subtype:

In both subtypes of bulimia nervosa, two factors that trigger episodes of binge eating are:

There is evidence that the performance of diets produces overeating -even when there are no previous disorders of eating behavior-.

A good example is the “Experiment of Minessota”, in which some experimenters invited 36 volunteers to participate.

In this experiment, two phases were established:

1. At first, they were allowed to eat as much as they wanted, for 12 weeks. The average daily calories amounted to 3,400.

2. Subsequently, the subjects were severely restricted. They only made two meals a day, which added up to 1,500 calories  in total.

The results showed that, after a few weeks, the volunteers of the experiment began to develop concern about food, just as many  began to be interested in recipes and cooking in general.

It was also obtained that many behaviors were increased such as chewing gum, drinking coffee or smoking.

In addition, according to the testimony of the subjects, they began to eat more than their body allowed them when they had the opportunity, even when  the experiment to which they were subjected was completed.

Other side effects suffered were: difficulty concentrating, loss of interest in sexuality, bad mood, sleep problems, etc. Some of them even developed a severe depression.

All these characteristics are present in the disorder of bulimia nervosa.

After one year, it was found that most of the symptoms had subsided and that the participants of this study recovered normal eating habits  .

As you can see, this interesting study shows the serious consequences that fasting and starvation can cause – which are usually present in  diseases such as anorexia or bulimia.

What is the nervous bulimia?

It is a mental disorder characterized by the performance of maladaptive behaviors in relation to the food field.

It is a mental illness that affects mainly women, as it happens in anorexia nervosa (95% of patients belong to  the female gender).

The age of onset of the disorder ranges between 18-25 years, which is why it occurs later than anorexia nervosa.

In addition, unlike anorexia, bulimia nervosa girls never have an underweight or weight below the recommended according to their body constitution  and age.

On the other hand, regarding the characteristics of binge eating – which are the most significant factor of this disease -, the following can be highlighted  :

The bulimic patient makes an effort to hide her illness, carrying out these binge-eating and compensatory behaviors without her family members noticing.

These behaviors aimed at hiding the problem are characteristic of people who have bulimia nervosa and, sometimes, it is complicated with lies.

In addition, since there is no significant loss of body weight, this disorder of eating behavior often goes unnoticed by family  and friends.

The behaviors performed by people suffering from bulimia nervosa, especially vomiting, often cause deterioration in the body.

Some of the most frequent symptoms and signs are:

These vomits are the most recurrent compensatory mechanism in the disease – sometimes it is also accompanied by the use of laxatives – and they are produced by  the guilt and regret that the girls suffer.

This behavior, like intense exercise, the use of other methods to expel food eaten or fasting later, is the only way in which  these people manage to reduce the anxiety suffered after a binge.

With regard to the consequences that this disease has on their day to day, we find that there is usually a deterioration or abandonment of studies,  since the addiction to food happens to require all their time.

This mental disorder has a multi-causal origin, in which the pursuit of thinness to be more attractive is not the only reason for  people to develop the disease.

It seems that there are genetic relationships that predispose a person to suffer from the disease, since it is more likely to develop when  a family member also has a disorder of eating behavior.

Of course, here it is difficult to define the cases in which the influence is merely genetic or when, on the contrary, what are acquired are the  bad habits that the family members learn from each other in relation to food.

Among the most relevant psychological causes to develop this type of disorder is having a low self-esteem, which can make the  person more vulnerable and give more importance to his figure.

It has also been found that girls who have experienced some particularly traumatic experience – such as having been the victim of sexual abuse or physical violence  – are more likely to have this disorder.

Of course, it is not by chance that there is an increase in this type of disorder in societies in which the slender figure is given special  importance.

The media, the messages we receive from people around us -critical for being overweight or praising weight loss-  empower us to seek this ideal of beauty in ourselves.

In addition, there are professions in which the image acquires special relevance: models, television presenters, etc.

According to some authors, a personality disorder occurs in 63% of cases of bulimia nervosa.

As you can imagine, the presence of a personality disorder complicates the course and recovery of the disease.

In the case of women with bulimia nervosa, the most frequent is borderline personality disorder.

It is a disorder characterized by unstable social relationships, risky sexual behavior, substance abuse (alcohol or drugs),  a labile or unstable emotionality and frequent feelings of emptiness.

Authors such as Dolan (1994) have indicated that this borderline personality disorder occurs between 24% to 44% of cases of bulimia nervosa.

Another type of associated psychopathology, which is found frequently in patients with bulimia nervosa are depression, impulsivity, anxiety, low  self-esteem and greater self-centeredness.

All this influences that people with bulimia nervosa present high risk behaviors, such as robberies and suicide attempts.