There are three phases of stress -according to the work of Hans Selye in 1936- through which the organism passes after encountering real or perceived threats: alarm, resistance, and exhaustion, as well as the phase absent in the response to stress.

Throughout the evolution of human beings, our survival has depended on the ability to overcome threatening situations for our lives, from being persecuted by predatory animals to recovering from diseases. But how do we become aware that a situation is so dangerous that we must adapt and survive it?

Often, we realize that a situation is threatening because of our heart rate increases; one of the side effects of stress. An endocrine born in Vienna named Hans Selye (1907-1982) was the first scientist to point out these side effects and collectively identify them as the results of stress, a term we routinely use today, but which has not really existed until less than a hundred years.

The scientist Hans Selye introduced the model of the General Adaptation Syndrome in 1936, showing in three phases the effects that stress has on the body. In his work, Selye, the father of stress research, developed the theory that stress is the main cause of many diseases since chronic stress causes permanent chemical changes in the long term. 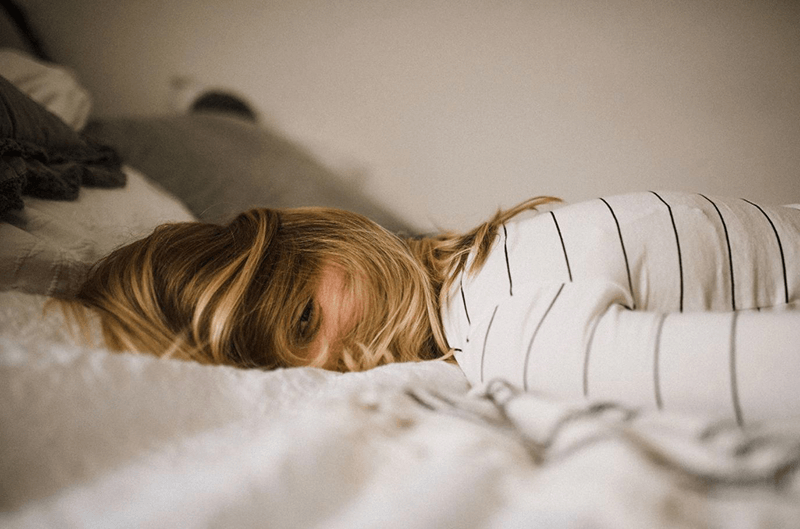 Selye observed that the body responds to any biological source of external stress with a predictable biological pattern in an attempt to restore the body’s internal homeostasis. This initial hormonal reaction is the response known as “fight or flight”, which aims to deal with the source of stress very quickly, almost automatically.

The process by which our organism strives to maintain balance is what Selye called the General Adaptation Syndrome.

Pressures, strains and other stressors can greatly influence our metabolism. Selye determined that there are limited supplies of the energy we use to deal with stress. This amount decreases with continuous exposure to the elements that cause us stress.

Stress phases according to Hans Selye

Going through a series of stages, our body works to recover the stability that the source of stress has taken from us. According to the model of the General Adaptation Syndrome, the adaptive response we humans have to stress develops in three distinct phases:

Our first reaction to stress is to recognize the existence of danger and to prepare to deal with the threat, a reaction known as “the fight or flight response”. The body “decides” quickly if it is more viable to flee or fight with the stimulus that the threat supposes, a reaction recorded in our organism from the beginning of the species.

Activation occurs in the hypothalamic-pituitary-adrenal (HPA) axis, a part of the endocrine system that controls stress reactions and regulates various body functions such as digestion and the immune system. The central nervous system and the adrenal glands also undergo activation.

During this phase, the main stress hormones, cortisol, adrenaline, and noradrenaline, are released to provide energy immediately. This energy can have harmful effects in the long term if, repeatedly, it is not used to carry out the physical activity that requires fighting or fleeing.

An excess of adrenaline results, in the long term, in an increase in blood pressure that can damage the blood vessels of the heart and brain; a risk factor that predisposes to heart attacks and strokes.

In this phase, everything is working as it should: you detect a stressful stimulus, your organism alarms you with a sudden shock of hormonal changes and you are equipped immediately with the energy necessary to manage the threat.

Read about How to Prevent from Stress 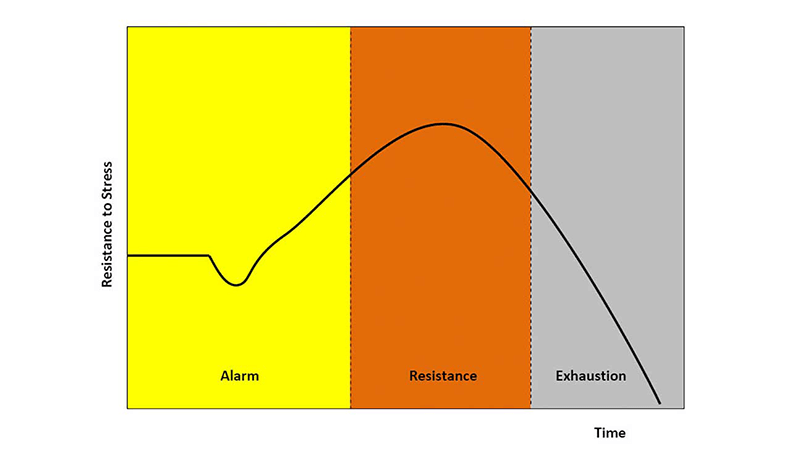 The organism changes to the second phase when it is assumed that the source of stress has been resolved. The processes of homeostasis begin to restore balance, leading to a period of recovery and repair.

Stress hormones often return to their initial levels, but defenses are reduced and the adaptive energy supplies we use to deal with stress decrease. If the stressful situation persists, the body adapts with a continuous effort of resistance and remains in a state of activation.

The problems begin to manifest themselves when you find yourself repeating this process too often, without getting a full recovery. Ultimately, this process evolves towards the final phase.

In this last phase, stress has been present for some time. Your body’s ability to resist has been lost because the energy supplies for adaptation have been exhausted. Known as overload, burnout, adrenal fatigue or dysfunction, this is the phase in which stress levels rise and remain high.

The adaptation process has ended and, as expected, this stage of the General Adaptation Syndrome is the most dangerous for your health. Chronic stress can cause damage to nerve cells in the tissues and organs of the body.

The section of the hypothalamus in the brain is particularly vulnerable to these processes. It is very likely that, under conditions of chronic stress, thinking and memory will deteriorate, developing a tendency towards depressive and anxious symptoms.

There may also be negative influences on the autonomic nervous system, which contributes to producing higher blood pressure, heart disease, rheumatoid arthritis, and other stress-related diseases.

The phase absent in the response to stress

The key element of this stress response that is missing in our stress paradigm today is recovery.

There is usually a time of recovery after being persecuted by some predatory animal, but it is more infrequent that we have a period of compensation after recurring events in our daily lives such as traffic jams, relationship problems, having patterns of inadequate sleep, problems at work, economic problems …

In fact, this type of stressors can be linked every day making the stress response “on” continuously.

In 2007, the American Psychological Association (APA) conducted its annual national survey to examine the state of stress in the country. The main discoveries were denominated under the name of “Portrait of a national pressure cooker”, with almost 80% of the people surveyed reporting experiences of physical symptoms due to stress.

The stress of the contemporary days is the culprit of many of the complaints that are seen in the day to day in the psychological consultations.

The progressive stages of the General Adaptation Syndrome show clearly where it can take us to be under conditions of chronic and excessive stress. However, we have the option of keeping these processes under control through, for example, some relaxation techniques or herbal supplements.