Adolescence is a turbulent and turbulent period, something that popular culture has very internalized. It is inevitable to think of an adolescent as that emotionally unstable person who is in a deep but uncertain search for his identity.

This is a fairly close description of adolescence, but incomplete, since the changes that occur in puberty are varied and not only involve the emotional aspect, but also the cognitive and social aspect.

Next, we are going to explore what are the psychosocial changes in adolescents and what consequences they can have on their lives .

Adolescence is a period of many transformations that are evident in the physical and psychological development of the individual . Because these changes are so sudden and disconcerting, adolescents often feel confused and even scared by the new experiences they are having.

One of the leading scholars on the changes that occur throughout development, not only in adolescence but throughout people’s lives, is the psycho@nalyst Erik Erikson.

Next we are going to talk in depth about what are the psychosocial changes that adolescents go through during this very turbulent period of their lives. Generally, these changes can be divided into three broad categories: cognitive, emotional and social .

1. Cognitive changes
Adolescence is the period of development of people where, according to the theory of cognitive development of the Swiss psychologist Jean Piaget, the last stage of his model is reached: the stage of formal operations. At this point, the adolescent acquires some advanced mental capacities, definitively separating him from childhood .

2. Emotional changes
One of the most well-known facts of adolescence is that hormones take control of the body, inducing a highly varied mood .

Added to this, there is the fact that the adolescent changes his educational stage, going on to study at the institute, a place where, when interacting with other adolescents, can be the scene of multiple conflicts and tensions. All this is the perfect cocktail so that the emotions of the adolescent are on the surface, feeling them in a much more pronounced way than when they were children.

Among these emotional changes we can highlight:

2.1. Emotional instability
It is well known that one of the most remarkable features of adolescence is its multiple mood swings. The adolescent mood is very, very variable. Young people of these ages can go from one extreme to the other in a very short time .

It is not unusual for a boy to get up in high spirits, only to become a little low at lunchtime and, when night comes, he is pensive and taciturn. In other cases, the mood varies over the course of days, going through sad times and times of joy with no apparent significant cause.

2.2. Acquisition of empathy
Without trying to generalize too much, boys and girls tend to be self-centered. The reason for this is that they find it possible to understand and interpret the emotions of others, and to put themselves in their shoes. 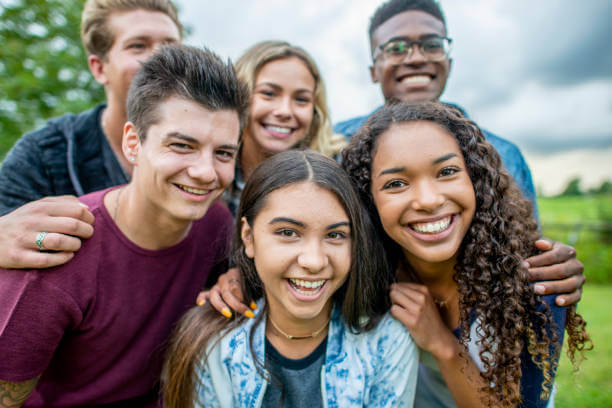 23. Insecurities and feelings of uncertainty
Adolescents experience puberty as a very uncertain period both hormonally and socially and emotionally . This causes that, by not knowing what will happen next and not being very clear about their role in life, they have a constant feeling of insecurity.

In turn, insecurity causes the changes to be perceived as more threatening and confusing than they are, which means that the child can fall into a loop of negative emotions experienced in a very intense way. Fortunately, it is a matter of time before you acquire a feeling of greater control of the situation, the insecurity vanishing as you mature.

3. Social changes
Finally, we can comment that adolescents go through a series of changes related to the role they have in the world and the way they interact with others. Among the most notable social changes we have:

3.1. Search for own identity
Before the age of twelve, identity is an aspect little thought about by boys and girls. They may feel identified with labels concerning their sex, cultural or family identity, but they don’t think too much about it. However, once puberty begins, identity becomes an object of much reflection on the part of the adolescent , so much so that we could say that they become obsessed.

3.2. Desire for independence
During childhood you are completely dependent on your parents to do everything. At the beginning of adolescence, this changes, as a result of the fact that the adolescent is already able to do more things on his own and, in addition, he wants to completely get rid of his dependence on his parents .

Symptoms of depression in young people
It is at these ages when the desire to become a more autonomous person begins, something that is evidenced both by doing more things by himself and by his aggressive attitude, even arguing with the parents so that they are not over him for so long.

This is not something to worry about at first. It is normal for adolescents to exhibit challenging behaviors and have some quarrel with their parents, although if they suppose a serious alteration in family life, they should go to a psychologist specialized in adolescence to evaluate the possibility of a mental health problem or disorder. .

3.3. Identity and sexual orientation
One of the most relevant changes in puberty is everything that has to do with sex and intimate relationships. Hormones, as we have commented, take control of the body and it is almost inevitable that certain physiological reactions occur linked to a series of very powerful emotions that lead adolescents to change their interests and ways of acting, thinking a lot about sex.