Some of the most effective natural antidepressants are sports, social relationships, kiwifruit, nuts, St. John’s Wort, borage, basil, kiwis, cuttlefish and squid, fresh vegetables and others that I will explain to you next.

Depression is a psychopathology that is characterized mainly by the presence of feelings of sadness, loss of interest in things and inability to enjoy and experience pleasure.

Likewise, symptoms such as decreased (or increased) appetite, insomnia, fatigue and high fatigue, nervousness or anxiety, feelings of guilt or despair, and decreased ability to concentrate often appear.

Currently, following the discovery of the main brain regions that modulate the mood and mood of people, this pathology can be treated more or less effectively (depending on each case) through the famous antidepressants.

The antidepressants are drugs that are specially designed to act specifically on the brain structures that modulate mood, regain its normal functioning and reduce depression.

However, not only antidepressant drugs can cause mood-raising effects, since there are also natural elements that can act in a certain way in the brain regions of depression and modulate the pathology.

It should be borne in mind that, in general, the antidepressant capacity of natural products is somewhat lower than that of antidepressants, since these substances are not specifically designed to combat this disease.

However, there may be more than valid options in various cases and produce satisfactory effects in those people who feel slightly down.

18 natural antidepressants that can be highly effective

The hypericum is a plant popularly known as the San Juan herb.

It has traditionally been used as an anti-inflammatory element in cases of contusions, spasms and muscle cramps.

In addition, lately it has established itself as one of the most effective natural antidepressants.

The effect of this plant is similar to that produced by sunlight, favoring the functioning of many brain regions linked to mood.

For this reason, it is considered an especially effective element for seasonal affective disorders, that is, those depressions that appear with the change of season.

Seasonal depressions are much more frequent than they may seem and are, in part, mediated by the decrease in sunlight captured by the body, so they usually appear when the days start to be shorter and the nights longer.

In those cases, a good way to supply the lack of light and combat depression is the grass of San Juan.

The ginkgo biloba is probably the plant with greater therapeutic effects brain that exists today.

Multiple beneficial effects of this plant have been described, and its antidepressant power is increasingly widespread.

A study conducted in 1993 showed that a group of elderly patients who did not respond well to antidepressant medications, decreased their depressive states by consuming a dose of 80 milligrams of ginkgo biloba extract.

Likewise, it has been demonstrated how the extract of this tree allows to increase the levels of serotonin (one of the main cerebral substances related to the state of mind) up to 33%.

Most antidepressant drugs act on this neurotransmitter, serotonin, trying to increase its presence in the brain.

In this way, it has been demonstrated that ginkgo biloba is not only effective in combating depression on its own, but also allows to increase the effects of antidepressant medications.

The borage is a plant that grows wild in the Mediterranean and grown in different parts of Europe.

Many beneficial substances have been connoted in this plant, such as essential fatty acids, potassium, zinc, vitamins B and C, and beta carotene.

Calming qualities have been described and it is mainly used to treat nervous conditions.

Likewise, it is a good ally to combat depressions and mood swings related to menopause and menstrual cycles and, above all, to treat nervous depressions. 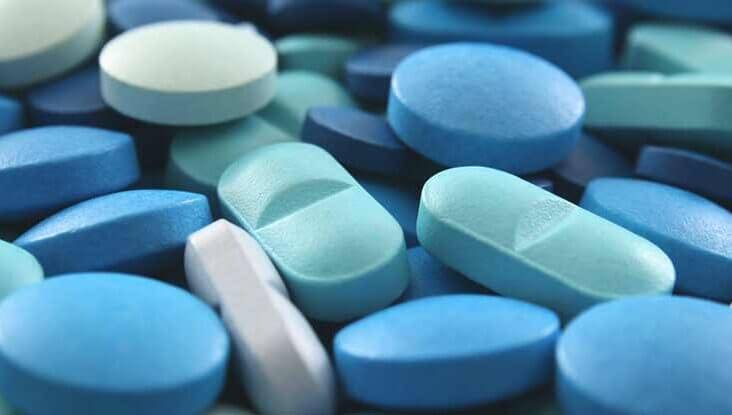 Basil is an herb popularly used in the Mediterranean diet.

Its essential oil is used in bathrooms to combat depression, nervous exhaustion, fatigue, fatigue and melancholy.

It is an element especially used in aromatherapy, where basil oil is used to perform stimulant and antidepressant massages.

These foods are the main sources of vitamin C, one of the most important elements for the development of the organism.

Its antidepressant effects are somewhat more indirect than those of the substances discussed so far.

However, often deficits of this vitamin can lead to depressive states and mood swings.

In general, foods rich in vitamin C avoid the feeling of fatigue and the feeling of sadness, so they can be suitable products to combat some of the depressive symptomatology.

Milk, yogurt and cheeses, among other dairy products, have the main characteristic of incorporating high amounts of calcium.

Calcium is considered an essential element for soul balance, so that depressions can often be accompanied by a destabilization of this substance in the body.

The lack of calcium can cause feelings of fatigue and excitability, so that consuming dairy products can combat this type of symptoms.

The minimum daily dose established by many nutrition experts is 900 milligrams of dairy products.

Cuttlefish and squid are the other two foods highly rich in calcium.

In this way, the above mentioned on dairy products also serves for these two foods.

Incorporating cuttlefish and squid in the diet can be a good formula to ensure adequate levels of calcium and avoid the possible negative effects of their lack in the body.

Fresh vegetables such as peas, beans or beans are foods that contain high amounts of iron.

As with calcium and other important substances, iron plays an important role in the brain functioning of people.

The lack of iron can alter mood and increase depression, so it is recommended to consume between 10 and 18 milliliters of these foods every day.

Nuts, apart from also containing high levels of iron (similar to those of fresh vegetables), are characterized by having a wide variety of essential amino acids.

Among them, highlights the tryptophan, an amino acid that is responsible for the production of serotonin and, therefore, determines in part the mood and mood of people.

Serotonin is a brain substance that has been linked to multiple physical and psychological functions, and highlights activities such as the regulation of mood, the control of anxiety, the establishment of the sleep-wake cycle and the modulation of appetite.

Thus, being rich in tryptophan, nuts are important foods for the production of serotonin and the functioning of this type of psychological activities.

Pumpkin is another of the richest foods in tryptophan, so consuming this food also increases the presence of this essential amino acid in the body and can increase the production of serotonin.

Apart from combating typical symptomatology of depression and controlling processes such as hunger and sleep, serotonin also allows to stimulate physical and mental activity, and reduce fatigue.

Sesame seeds contain both tryptophan and phenylamine, so they are also products that can be effective to combat certain symptomatology of depression.

Keep in mind that without the presence of tryptophan in the body, the brain fails to produce serotonin, so the lack of this amino acid can easily induce deregulation of this neurotransmitter and alterations in mood.

Bananas contain high amounts of nutrients and fibers, and have low levels of fat.

Likewise, they are rich in vitamins, minerals and trace elements, and provide the body with a rapid and effective supply of energy.

Bananas are another major source of tryptophan, so they are also products that help the production of serotonin and the regulation of mood.

They have a calming effect on the central nervous system, encourage positive thinking and increase the optimistic mood.

Fish such as anchovy, eel, tuna, bonito, salmon, sardine or mackerel are very rich and beneficial foods for the human body.

They have low levels of fats and high nutritional elements such as polyunsaturated fatty acids, especially omega-3 fatty acids.

Apart from the physical benefits it provides such as regulation of blood pressure, increase in the functioning of the circulatory system or prevention of arthritis, its consumption is also beneficial for the psychological state.

This food is an important source of tryptophan, so that, like the foods discussed above, regulates the production of serotonin and mood.

Likewise, a publication of the British Medical Journal of 2002 showed how the consumption of this type of food can have a protective effect for dementias, especially for Alzheimer’s Disease.

Chocolate is probably the food that has been most associated with depressive and nervous states.

Many people when they feel nervous or depressed choose to eat this food in abundance.

The truth is that five actions of chocolate have been connoted that can be effective to combat depression.

Sugar and cocoa butter, two of the main elements of chocolate, make the body receptive to absorbing tryptophan and, therefore, increase the levels of this and the production of serotonin in the brain.

On the other hand, the content of cocoa has caffeine and provides a stimulating effect that may be helpful in slightly depressed people.

Phenylethylamine is another of the main substances in chocolate that provides an exciting and stimulating effect.

Another advantage of this food is that the milk protein in chocolate provides exorphin in the body, a natural @nalgesic, and theobromine, a substance similar to caffeine.

Pineapple is the fruit that most stimulates physical well-being and prevents frustration.

It contains high amounts of minerals, vitamins and active compounds that stimulate the production of serotonin.

At the same time, it also has tranquilizing components that manage to calm the anxiety and agitation that usually accompanies depressive states.

The beneficial effects to fight the depression of the pepper fall in two main substances: capsaicin and tryptophan.

Tryptophan, as we have seen previously, allows the synthesis and regulation of serotonin in the brain.

The capsaicin is a substance that can combat frustration, anger and feelings of sadness.

This component is found in chili, and is the cause of the burning sensation in the tongue that produces this food.

When ingested, the brain perceives spicy heat as if it were pain, so before its presence it responds by releasing endorphins that enhance feelings of well-being.

Soy is a food rich in tryptophan and vitamin B1 (or thiamine).

Thiamine plays a fundamental role in the metabolism of carbohydrates, so its consumption brings high doses of energy to the body.

The shortage of vitamin B1 can produce feelings of irritability, nervousness, lack of concentration and memory, and can contribute to the onset of depressive states.

Finally, eggs are the last food rich in tryptophan, so its consumption also favors the production of serotonin.

Likewise, they have high levels of vitamin B12, one of the most important substances for the functioning of the nervous system.

Also Read: Doctor, Why Do I Feel Sad?

The deficiency of this vitamin can cause neurological disorders as well as sensory neuropathies, feelings of irritability and depression.