The phonophobia  is defined as fear, anger or anxiety to hear certain sounds that while not strong, trigger very negative emotions in those who suffer from this condition.

Some researchers believe that phonophobia is an extreme case of misophonia, the irritability that occurs in some people when they hear certain common noises, such as chewing or coughing of a person.

Fortunately, there are effective treatments. Do you want to know more about phonophobia and misophony? Continue reading please. 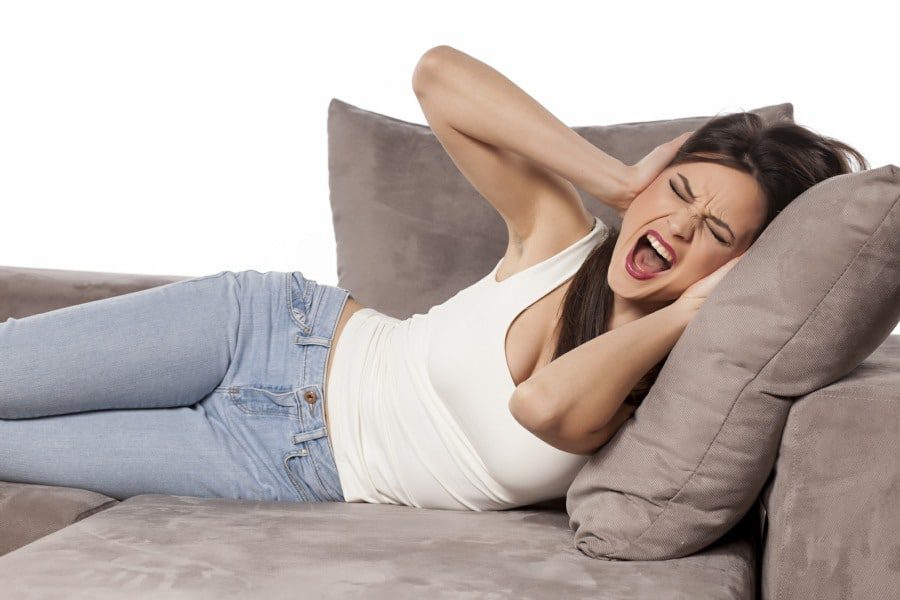 Phonophobia is an irrational fear of certain noises, which are not necessarily loud noises. It is not an auditory disease: people with phonophobia have an anxiety disorder.

For example, if you start to sweat and your heart beats fast when you hear someone chewing gum, or when the cutlery makes noise when hitting the plate, then maybe you have phonophobia.

Phonophobia was recognized as a disease a short time ago. Many doctors still do not know it and therefore can not diagnose it adequately.

For this reason, many may tell you that your problem is not “real”, that your phobia is simply a suggestion, a trickery that plays your mind.

However, phonophobia is a very real problem and researchers have proven it.
A researcher at the University of California, San Diego, conducted a very interesting study on this disease, placing electrodes on the skin of people with phonophobia.

To this group of people with phonophobia electrodes were placed on the skin to measure their conductivity and they were made to listen to a series of sounds.

The conductivity of his skin increased, because the sounds really caused a physiological response in their bodies.

In conclusion, phonophobia does exist, it is not a suggestion, because the body really reacts in certain ways to certain sound stimuli in people who suffer from this disease.

These are some of the most common symptoms:

As you have already read in previous paragraphs, if you are irritated by the noise that certain people make when chewing, the clink of cutlery, the voices of certain people or the noise of a photocopier, then you have misofonia.

If the negative emotions that these sounds provoke you include extreme anxiety, sweating in the hands, tachycardia and desire to flee, then it is phontophobia.

Both conditions are characterized by low tolerance to sound, as well as hyperacusis, although it should be noted that hyperacusis is a totally different disease.

Here are the differences:

Hyperacusis occurs when you are disturbed or are afraid of loud noises, such as fireworks or a balloon when exploding for example.

If you have hyperacusis, when turning on the TV or the home theater you will lower the volume to the minimum first, then turn on the device and then turn up the volume, to avoid sudden noise.

You will probably avoid going to parties where there will be loud music, drums or fireworks.

When there is hyperacusis, it is possible that there is an alteration in the perception of sound: the auditory pathways are more sensitive than those of other people, they react excessively to loud noises and that is why they irritate you so much.

On the other hand, if you have misophonia, you are disturbed by certain noises that are not necessarily loud, sharp or serious, but can be any sound, like the noise that comes from clicking your tongue, the murmur of running water, the sizzling of A bonfire, or almost anything else.

In cases of misophony or phonophobia there is no hypersensitivity in the auditory pathways, there is only an association of negative emotions, which can include extreme anxiety and fear, in the presence of certain sounds.

It is important to note that many people with hyperacusis can develop, secondarily, misophonia or phonophobia, because they also begin to associate loud sounds with negative emotions, due to the hypersensitivity of their auditory pathways.

It is not yet known exactly why the hearing aids of some people are extremely sensitive to loud sounds or why other people associate negative emotions and feel anxiety when they hear certain sounds, even if they do not have a special sensitivity in their auditory pathways.

In the case of hyperacusis, it is believed that chronic exposure to noisy environments or a traumatic experience associated with loud noises can cause hypersensitivity of the auditory pathways.

In the case of misophony or phonophobia, the trigger can be a traumatic event that has been associated with a certain sound, for example changing jobs or school and having to have lunch in a noisy environment, moving and listening to sounds in a new neighborhood , etc.

Phonophobia can also have organic causes. A skull surgery, especially if it is near the ear, migraine , autism or certain genetic diseases can also cause phonophobia.

How these conditions can influence your life

Many people suffer from hyperacusis, misophonia or phonophobia, and this can have a very negative impact on their lives.

Most people try to avoid the sounds that bother them, irritate them or cause them anxiety.

But think about the following:

If you have phonophobia and you are extremely irritated by the sound of silverware clinking, then you will have serious problems going to a restaurant.

There are those who detest chewing noise (especially if a relative or a close friend) who can no longer tolerate a lunch or dinner together.

Thus, low tolerance to sound can affect your family life, your work and your social life. Even if you have moderate intolerance to certain sounds, you may have trouble driving your car in the city center, to go to the movies or to the mall.

If the noise of the vacuum cleaner, the hair dryer or the lawn mower bothers you, your low tolerance to sounds will not leave you alone even in your home.

Diagnosis of phonophobia, misophonia and hyperacusis

These diseases are similar to each other and it is difficult to make a differential diagnosis.
It is possible to perform a test exposing the patient to different sounds, and checking their level of displeasure with each one of them.

But this may not happen in patients with misophonia or phonophobia. Therefore, it is necessary to combine several tools to arrive at an accurate diagnosis.

The realization of an audiogram and a deep questionnaire to the patient, to which a detailed description of their symptoms must be requested, can be combined with the sound tolerance test to determine which of these diseases the patient suffers.

The phonophobia and other conditions that involve low tolerance to sound are not yet well known and there are doctors who do not know how to handle them.

Maybe you already consulted and the doctor answered that there was nothing to do about it, or worse, that you avoid the sounds that bother you or put earplugs in your ears.

However, you have to know that avoiding noise that irritates you or provokes anxiety will not solve your problem. Not to go around avoiding all kinds of celebrations, parties or demonstrations.

What will you do when you have to go to a lunch in a crowded restaurant? You can not avoid family reunions forever.

On the other hand, placing plugs in your ears will only make the problem worse. If your hearing aids are very sensitive, they will be even more sensitive if they do not receive sound stimuli because you have covered your ears.

So, what is the solution?

There are several possible treatments for hyperacusis, misophonia and phonophobia, and they are the following:

This technique will be especially effective if you have hyperacusis. If your ears are sensitive to loud noises, a solution may be to start exposing them to loud sounds little by little, until the hypersensitivity disappears.

At the same time, it would be convenient for you to be in an environment rich in sounds all day and perhaps also during the night, as this will also help to diminish the sensitivity in your hearing pathways.

It will be especially effective if you have misophonia. The therapist will try to give you tools that help you to overcome anxiety and negative emotions when you hear the sounds that irritate you.

On the other hand, try to change those negative emotions for positive thoughts, which are associated with the sounds that today are an unpleasant stimulus for your ears.

Relaxation techniques that include breathing exercises and progressive muscle relaxation may also be useful in controlling the symptoms of any of these disorders that involve a low tolerance to sounds.

These techniques will help you control the anger, frustration and anxiety that the sounds cause you.

Before starting any treatment, it is best to perform a professional consultation.

Research work at the Academic Medical Center of Amsterdam

Currently, there are very few institutions worldwide that consider phonophobia as a disease important enough to carry out research on it.

Among these institutions is the Academic Medical Center of Amsterdam, where Dr. Arjan Schroder, a psychiatrist, studies the causes, effects and possible treatments for phonophobia.

The group of researchers at this center has been working for several years on this issue, and every week two or three people come for help, according to Dr. Schroder.

Almost everyone feels a certain rejection of certain noises that people make, but in some people the symptoms are so severe that they clearly cause suffering.

People with phonophobia in many cases can not eat or sleep in the same room with other people, or even stop going to work.

It is a conditioning process, says Dr. Schroder. A connection between a neutral sound and a negative emotion is generated. And if you then start avoiding that sound, the problem simply gets worse.

Although its causes are still not well understood, phonophobia can be treated. At the Amsterdam Medical Center patients with phonophobia perform group therapy.

In the sessions, therapists apply techniques that allow patients to disconnect the sounds of negative emotions. It’s like “reprogramming” your brains and therefore, getting positive results takes a certain amount of time, but getting them is perfectly possible.

A 12-year-old girl went to the ENT because she was very uncomfortable listening to certain sounds, such as the sound of a plastic bag or the noise of a small balloon explosion.

When I heard these sounds, the girl had tachycardia, sweating a lot and crying.

The symptoms began after the girl saw a big fireworks show, a few months ago.

After several studies, the doctors did not detect physical abnormalities in his ears or in his brain, and he was diagnosed with phonophobia.

At the beginning of her treatment, she attended two weekly psychotherapy sessions with her parents, and she also learned relaxation exercises.

At the same time, he was gradually exposed to a series of sounds, with the aim of gradually increasing his tolerance for them.

In only three months of treatment, the girl showed an important improvement, and at six months, she was able to witness a fireworks show again.

This could also be your case. If you think you have phonophobia, consult the right professionals to get a correct treatment for your condition.